Maps of Seven Dials over the last 300+ years show how the basic street layout has remained little changed. The slum clearance and road widening to make present-day Shaftesbury Avenue reduced the size of the area but the characteristic layout has been retained and an old route, Cucumber Alley, has been restored. This is the only quarter of London remaining almost intact from late Stuart England. 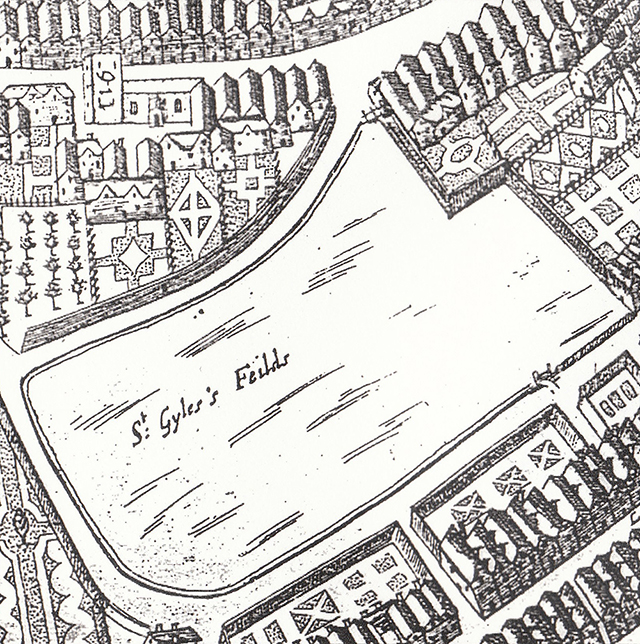 1658 (Faithorne and Newcourt): Shows the site of the Seven Dials development as fields. (Courtesy of Camden Local Studies and Archives Centre). 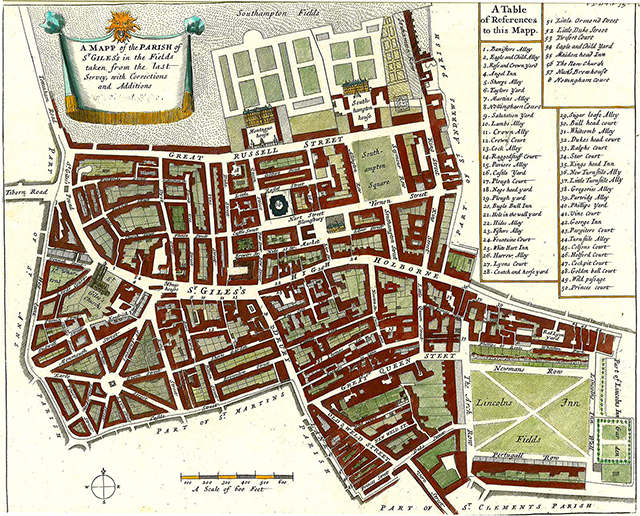 1723 (John Strype): St Giles' Parish map, shows the orientation of the base of the Sundial Pillar and illustrates the unique layout of Seven Dials compared to its surrounds. 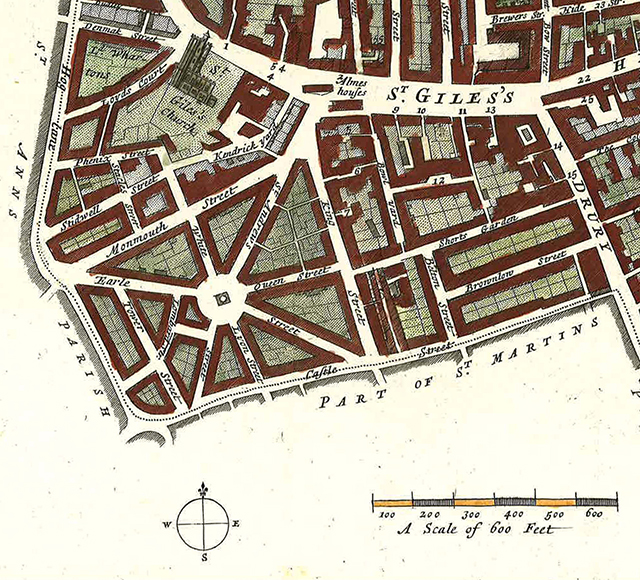 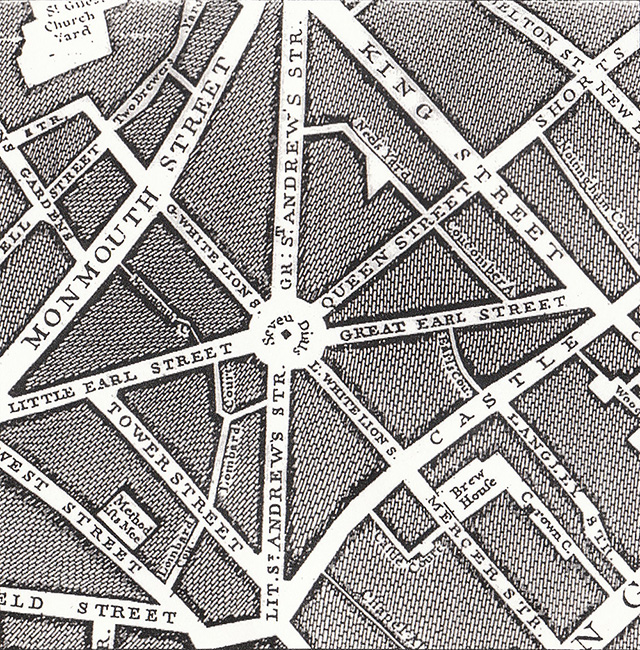 1745 (James Rocque Map): showing some early street names and confirmation of the orientation of the Sundial Pillar. (Courtesy of Camden Local Studies and Archives Centre Library) 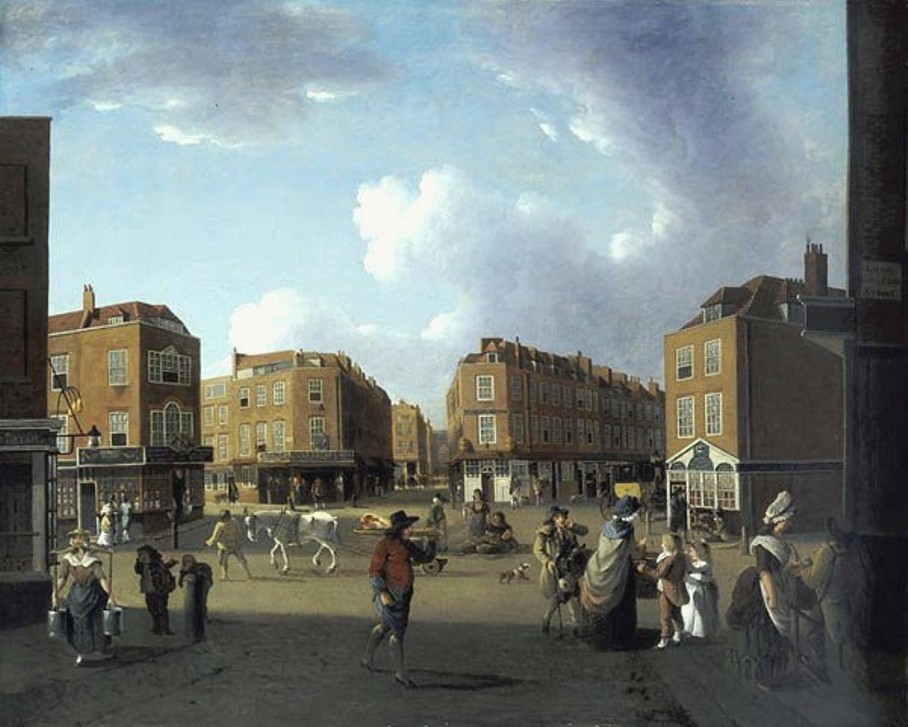 Seven Dials 1776 by William Hodges. Just after the removal of the Sundial Pillar. 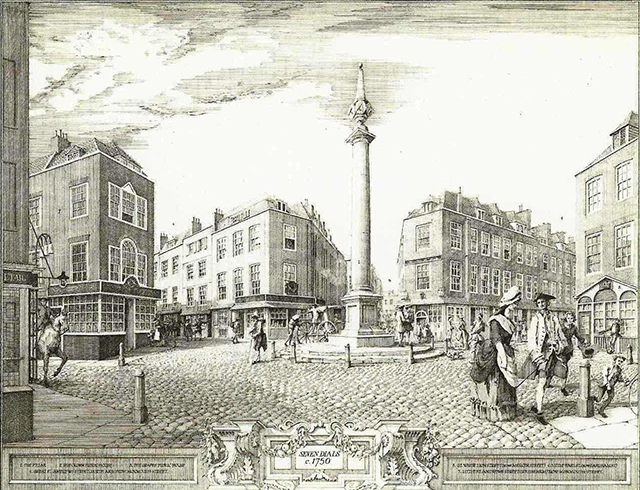 Paul Draper, trustee of the Seven Dials Trust, created this theoretical drawing of how the original Sundial Pillar may have appeared in c.1750, based on William Hodge's (1773) painting produced three years after the column had been removed. 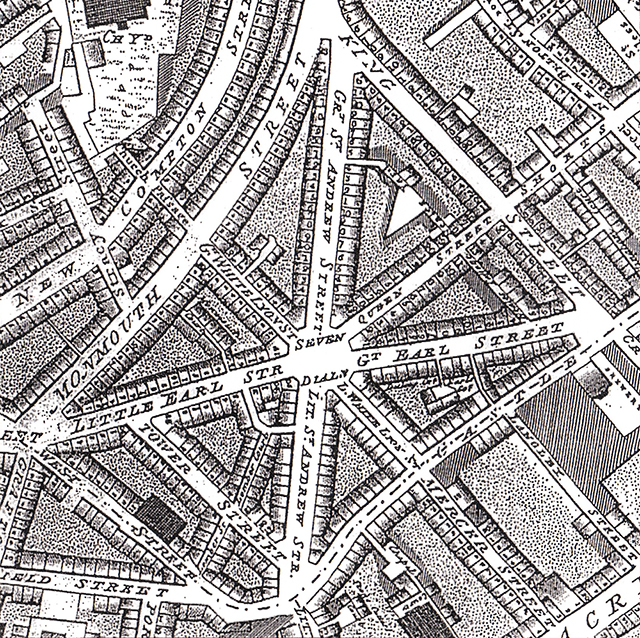 1799 (Richard Horwood): the Sundial Pillar has gone. Lombard Court has become Lomber Court and Coucumber Alley has become Neale's Passage. The map has a greater degree of accuracy and detail (including street numbering), particularly useful in showing the original form and how much of Thomas Neale's 1690s layout remains. 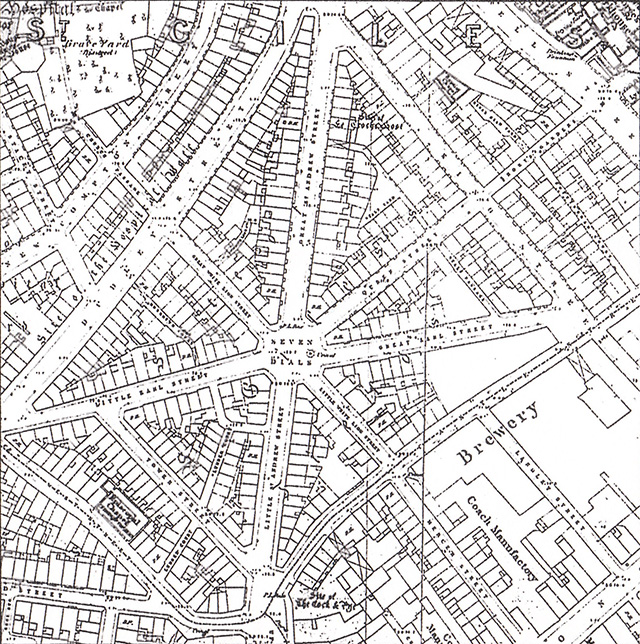 1874 (OS): Former Monmouth Street has become Dudley Street and Lomber Court has become Lumber Court. Neal's Yard and Neal's Passage have now dropped the "e" of Thomas Neale. A public street urinal has appeared at Seven Dials and there are now about fourteen public houses within the area. The Brewery buildings around Castle Street (today's Shelton Street) have been expanded and, in the 1880s, will come to dominate Great Earl Street. 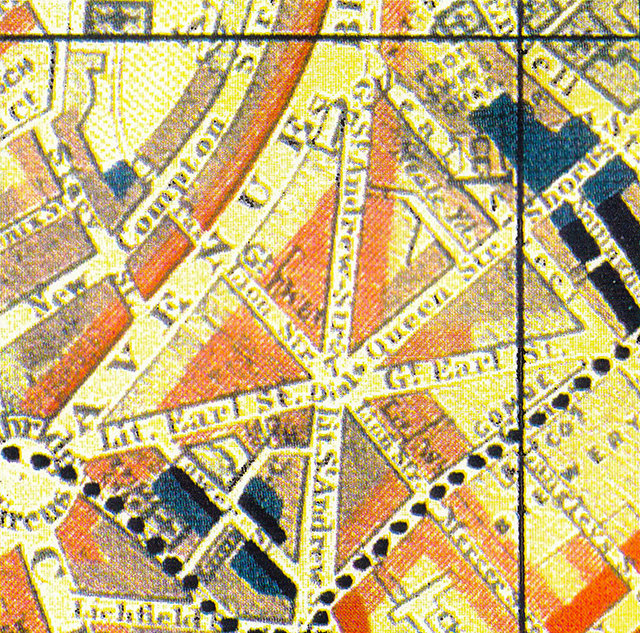 1889 Charles Booth's poverty map: note the stark variation between the black designation of Nottingham Court (thought to be a base of prostitution) and the well-to-do fringes of Upper St Martin's Lane and Shaftesbury Avenue. 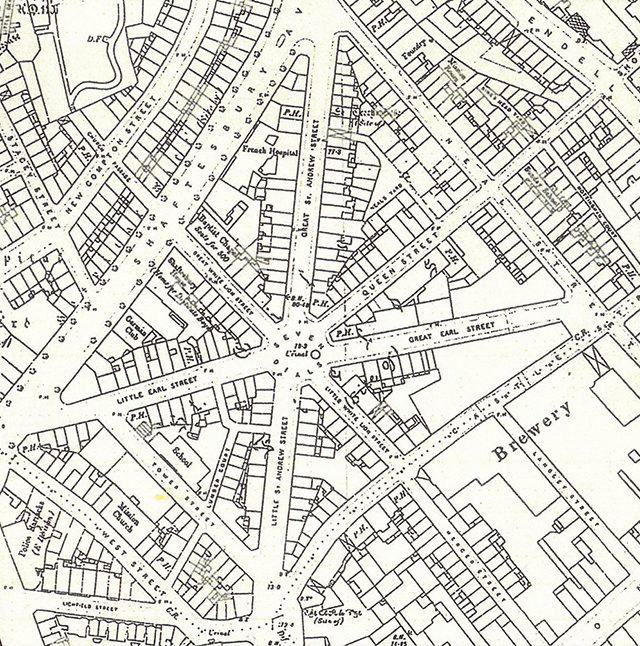 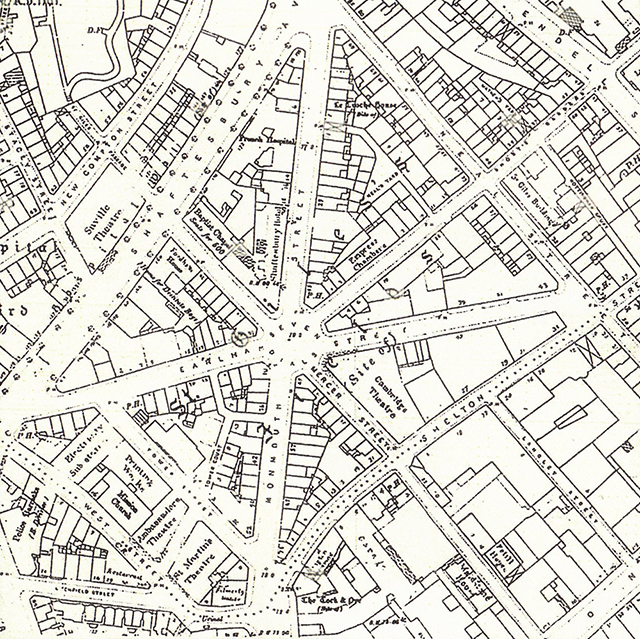 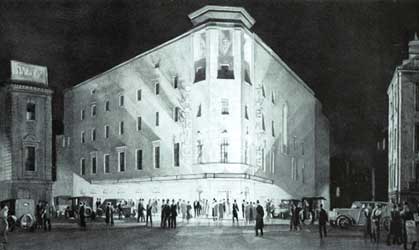 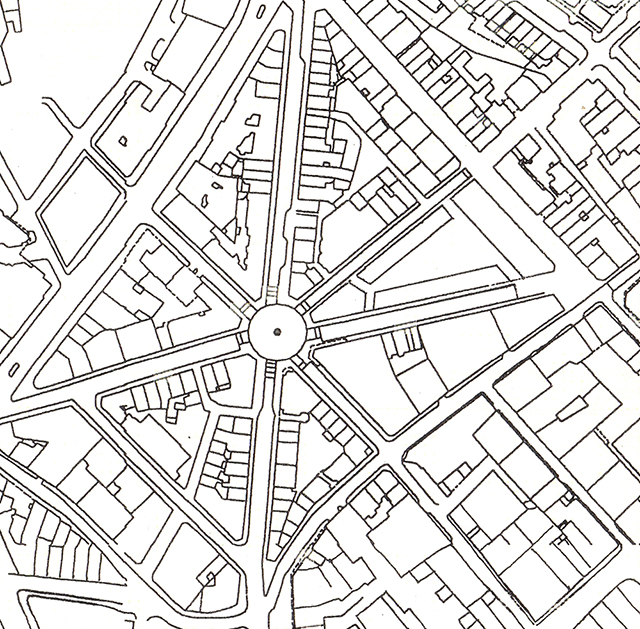 2000: Seven Dials, showing much of the original street plan, the restoration of the 1690s Sundial Pillar and traffic management features.

1910 view of Mercer Street (north) showing a range of the small local businesses typical of the area, including a bicycle repair shop, hairdresser and wardrobe dealer. 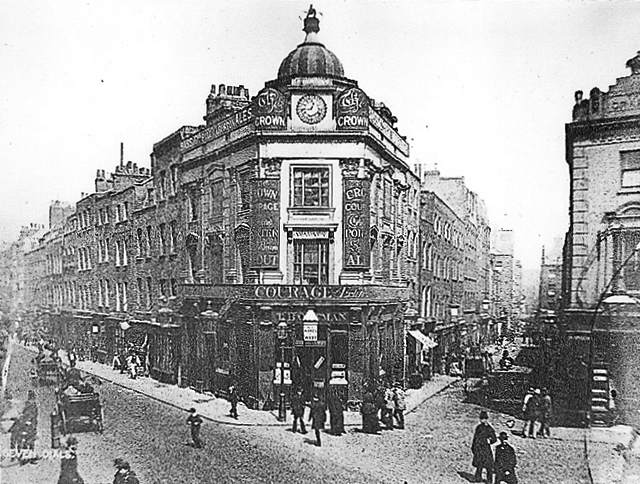 c1895 The Crown public house looking north. The form of Monmouth Street and Short's Gardens is retained today although many Victorian features have been lost. 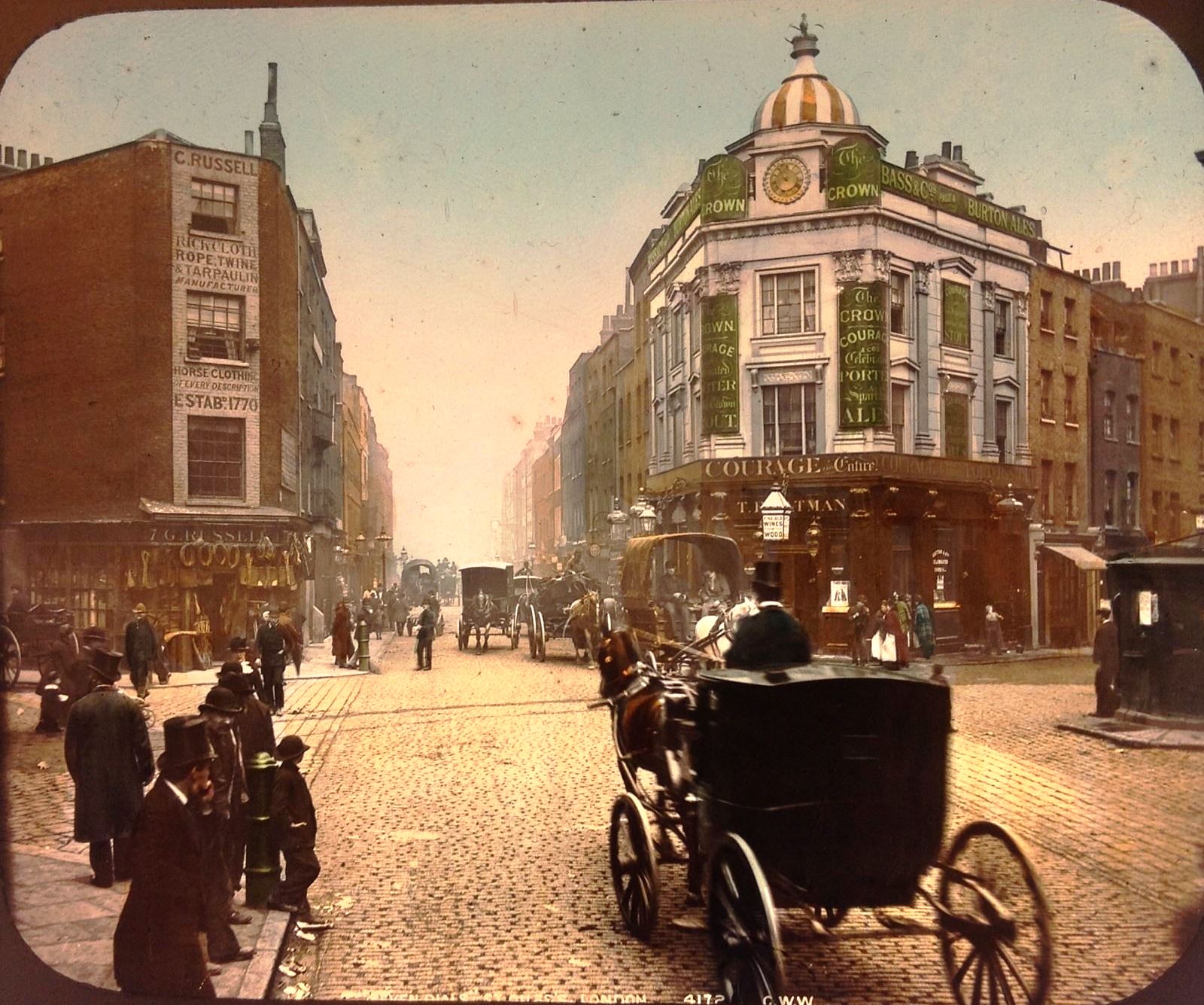 More in this category: « Voices from the Past
back to top