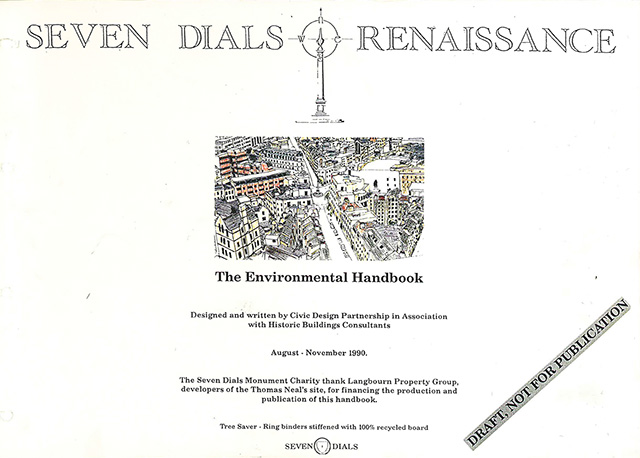 In 1990, with the Sundial Pillar restored plus restoration work and new build completed on many of the area's buildings, The Trust turned its attention to the issue of general public realm improvements in Seven Dials.

Seven Dials had been declared an Outstanding Conservation Area in 1974 and a Housing Action Area (1977-84) but no formal enhancement scheme had been prepared. The Trust decided to explore the possibility of a comprehensive mechanism to encourage all local property owners and authorities to co-operate in works which are historically appropriate and enhance the character of the area as a whole. It would deal with all inter-related aspects, such as buildings, streets, street furnishings, lighting, planting, cleaning, rubbish and traffic management.

In 1990, the Trust commissioned an ‘Environmental Study’, based on careful historical and architectural analysis of the area. We appointed a multi-disciplinary team including Peter Heath, architect and town planner, and Dr. John Martin Robinson, architectural historian. This study was funded by the Kleinwort Benson Property Fund, who at that time had extensive holdings in the area. It was their suggestion to appoint a multi-disciplinary team (at twice their original budget) which paved the way for the unusual and exemplary outcomes.  The second edition was funded by the Department for Culture, Media and Sport, the Foundation for Sport and the Arts and the Kleinwort Benson Property Fund.

“Many improvements to our public realm are piece-meal, short-lived and of dubious quality. In the case of Seven Dials, the Trust in partnership with Camden Council and Shaftesbury PLC has brought an entire neighbourhood back to life and the environmental improvements are based upon the coherent, detailed and holistic vision set out in the ‘Seven Dials Renaissance Studies’. … This partnership has involved the voluntary, private and public sectors working towards a shared vision on a long term project.” Colin Davis in presenting the first PRIAN national award.