The Seven Streets of Seven Dials

The Seven Dials Conservation Area is one of the most compact and distinctive pieces of townscape in the seventeenth, eighteenth and nineteenth century patchwork that makes up the West End of London. Most London estate developments in the late seventeenth and eighteenth century were planned around a square.Seven Dials is unique, however, in having a radiating pattern of seven streets and a central polygonal space. The streets are only forty feet wide and the Sundial Pillar is forty feet high.

Thomas Neale's original plan, submitted to Sir Christopher Wren as Surveyor General, shows six streets and a church but Neale cheated by adding a street and failing to build the church, thus increasing his land value without providing the social facilities. The Sundial pillar only has six faces - a seventh face would have been impossible. It is highly likely that the stonemason Edward Pierce was a member of the Masons (whose first Lodge was in Covent Garden) and the Sundial Pillar and the whole layout probably relate to the basic precepts of the 'Craft' of Masonry. 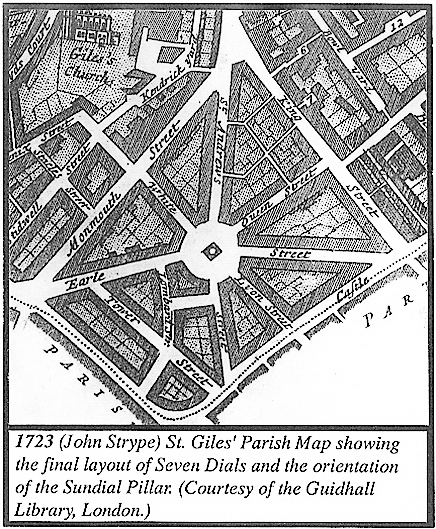 Map by John Strype (1723), courtesy of The Guildhall Library, London.

The seven streets radiating off the Dials have had changes of name over the years.

The Seven Streets of Seven Dials