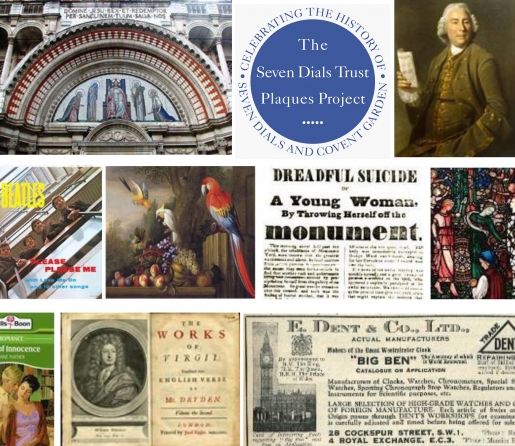 Nathaniel Westlake was the leading designer of the stained glass company Lavers & Barraud, of which he eventually became Partner and then sole proprietor in 1880, the company becoming Lavers & Westlake. The stained glass works were at no. 22 Endell Street and the original sign can still be seen today on the handsome Grade II Listed  building. Westlake lived at no. 20 Endell Street.

William Hazlitt stayed at his brother John’s house at 139 Long Acre while he studied to become a minister – calling which he soon rejected – enjoying the many brothels in the area. He then went on to study philosophy, then painting, with his brother, a noted miniaturist, but eventually turned to writing. He became probably the first Englishman to make a living as a professional critic. He was also a parliamentary reporter and freelance lecturer but is best remembered as an essayist.