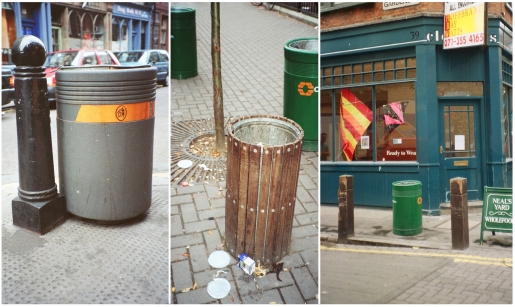 The use of bollards in the Seven Dials and Covent Garden area dates back to the original layout in the seventeenth century.  Protective stone bollards are shown on Edward Pierce's original design of the Sundial Pillar and around the Covent Garden Piazza. The traditional use of bollards was much the same as today: to segregate vehicles, both horse-and man-powered, from buildings and people. Designers often made an asset of the functional necessity and laid them out to contribute the pattern and arrangement of buildings and spaces. The original materials used were stone and timber, progressively replaced by cast iron in the eighteenth and nineteenth centuries, each area often boasting elaborate decorative designs.

When the first Renaissance Study was published in 1990, we were confronted by a mass of discordant and mostly unslightly street furniture and lamp columns.

There were no less than ten forms of bollards. Among them were Seven Dials bollards, with the lettering 'St Giles Parish' cast into the surface, probably dating from the mid to late nineteenth century. Photographs and drawings thought to date from 1888 show this type of bollard. This attractive cannon form has been recast, featuring the Golden Hind (more specifically a wounded female deer) symbol of the St Giles and 'Seven Dials' in embossed lettering and used as the standard, replacing the ten different, modern designs previously used.

The concept of using the Golden Hind symbol, which is part of the heraldic crest of the ancient Parish of St Giles-in-the-Fields, was developed by Peter Heath, co-author of the original Seven Dials Renaissance Studies. In partnership with Camden and Shaftesbury PLC, the Trust has developed this theme for bollards, litter bins, street name plates and recently for its People's Plaques and Street History Plaques schemes. It has also been used by Shaftesbury on street maps and banners. In addition to consistency, they all refer back to the area's history, building on the distinct sense of place in Seven Dials. 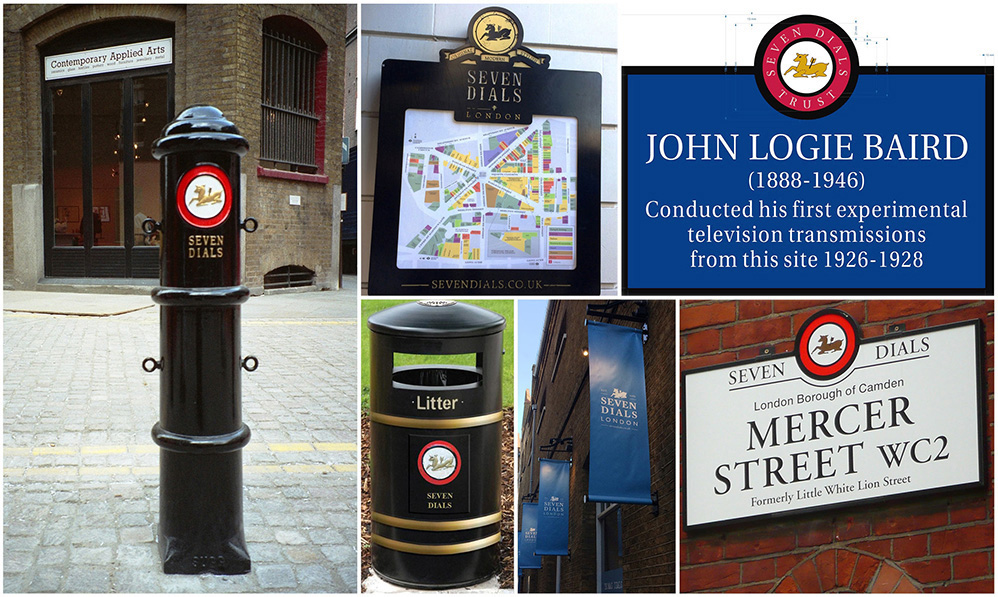 Both our neighbourhood street name plates and the People’s Plaques are manufactured by A.J. Wells in the Isle of Wight. As with the Covent Garden Lantern™ they are designed and manufactured to be long life products. The black frame is the most difficult aspect of manufacture. A.J. Wells are leading manufacturers and make the signs for London Underground and export widely, including to China.

Read 7985 times
Published in All Projects
Tagged under
More in this category: « 1990- : Major Planning Appeals, Listings & Planning Applications 1992: Façade Improvements »
back to top