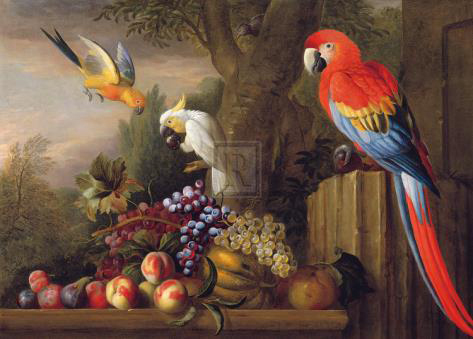 Born into a Protestant gentry's family in Hungary, by 1684 Jacob Bogdani was working as a still-life painter in Amsterdam, where he may have gone to escape Catholic persecution. By 1 June 1688 he was in London, settling at Tower Street, in the parish of St Giles in the Fields. In 1694 he painted flower decorations for Mary II's Looking-glass Closet in the Water Gallery at Hampton Court. He was patronised by the leading aristocratic families,including William Cavendish, 1st Duke of Devonshire at Chatsworth House. From c.1703 his interest in bird painting greatly increased, having access to Admiral George Churchill's aviary. Bogdani's works show ensembles of farm, wild and exotic birds, often with a background of classical architecture and he became the leading exponent of this genre in England, very much in demand. Queen Anne “was pleas'd with his performances & encourag'd him much”. His prolific output and exact repetitions of his more successful images suggest a reliance on sketches and the use of assistants. Prosperity allowed him to acquire property and he became Lord of the Manor of Hitchin, Herts.