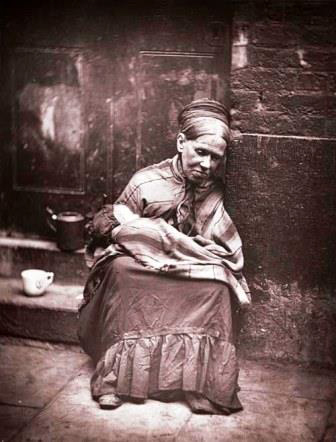 The present day large block of housing, Dudley Court, covers the site of the infamous St Giles Parish Workhouse, here from the early eighteenth century. In 1865 The Lancet reported a catalogue of appalling conditions in the workhouse which housed over 900 paupers. This photograph of a prematurely aged pauper slumped in a doorway with another woman's baby in her arms was taken on the steps of the workhouse in Short's Gardens and published in Thompson and Smith's Street Life in London, 1877. She was characterised as a 'St Giles crawler' and the image is a reminder of the desperate conditions of the poor in Seven Dials and St Giles. The workhouse closed in June 1914 and from May 1915 the premises were used for the Endell Street Military Hospital, the only British Army hospital to be staffed entirely by women, (This is already marked by a plaque).